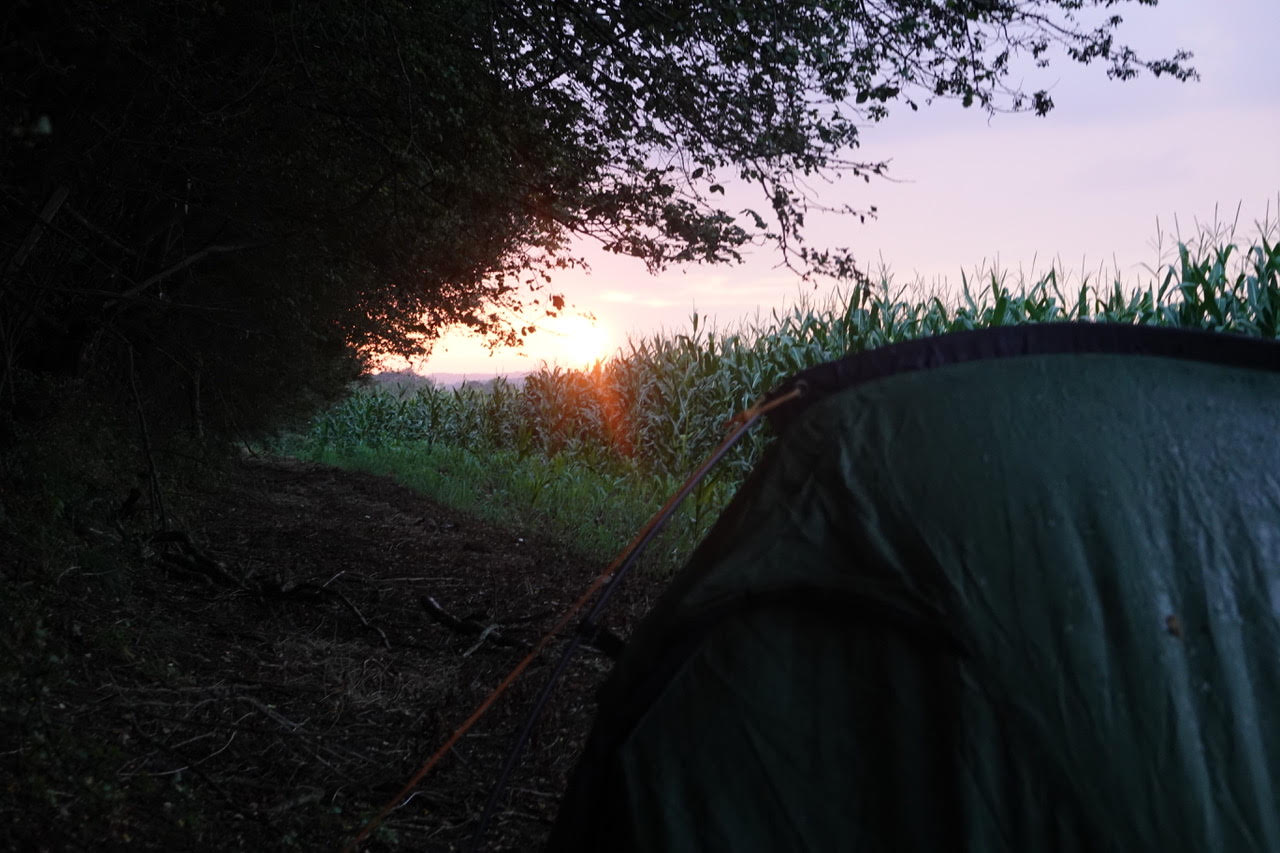 I rode away from my home in Hereford with my beloved family and closest friend stood on the drive waving me goodbye. A strong feeling of apprehension swirled with determination and excitement in my belly. The rolling hills and expansive green spaces of Herefordshire, graced by the light from which the golden valley derives its name, seemed to join in with the farewell as I crossed the county boarders. I could feel the wind at my back and the sun shining on my face. The road ahead was long and unfamiliar, but the adventure had begun, and I met it with full participation.

Josephine and I flew out off the Eurotunnel into the final hour of sun on a midsummers day. Those first miles on foreign tarmac felt electric. I was liberated, gliding along open roads with a long adventure ahead of me. My whole body smiled as I watched my shadow be stretched and pulled whilst leaning into long corners in the golden light. The plan was to ride till dusk and camp somewhere before finding the Trans Euro Trail and continuing south. I was, however, about to endure an early and probably avoidable natural gauntlet which would kick the trip off to a roaring failure.

As the sun set, it pulled with it a thick blanket of dark clouds charged and ready to burst by days of blistering heat prior to my arrival. The light dropped back quickly to let the clouds proceed uninterrupted in their duty to replenish the land with much needed water. I saw them approaching but my exuberance could not, at this point, be affected by A BIT OF RAIN. It couldn’t be so bad.. right?

I continued on and was greeted first by a wave of cold air that carried the polite notice to say ‘If you aren’t aware, the weather is changing in approximately very little time and we collectively, as the weather, would suggest that you make the necessary preparations’. The message, I’m sure, was heeded by the moles, voles, rabbits and birds of northern France, who would have taken shelter in their cosy homes with their furry friends and feathery families.

For me however, solo, on my motorcycle, with the sea behind me and the road ahead, there was nothing for it but to keep going. “Perhaps it wouldn’t be that bad” – a thought left by the last glimmer of my celebrating soul as it slipped out of my mind like oil down a funnel. In hindsight, I should have looked closely and listened to the murky grey sky as it I’m sure it would have said ‘Yes, and to add to the notice, its going to be really bad if you aren’t prepared’. The elements don’t lie.

The first of the water spilled out of the floating reservoir and plummeted freely towards the ground below. It was 7:30pm and almost all light had been sucked from underneath the cloud cover. At this point, the rain was manageable. I donned my bright yellow waterproofs and began to search for a place to sleep. The search was fruitless to begin with, as nowhere seemed to fill my criteria for a ‘good spot’. This pickiness landed me in trouble, as the big droppy fat rain began splosh down. Eventually I settled for the peripheries of a corn field which was flat with some (but not much) tree cover.

To my naive delight the worst of the storm seemed to have passed by nightfall. I was able to get my tent up and attempt to organise my luggage. Many of my things were wet so I decided to leave them out of the small tent so not to contaminate the things that had survived. I sat in the muddy field, hungry and tired having not eaten since breakfast, but by no means depleted in spirit. Spitting embers of the downpour continued to fall from a deep purple sky whilst the human-sized corn plants looked on in puzzlement. They had not been informed that a soggy boy on a motorbike was going to be sleeping in their field this night.

I fell asleep hoping that the storm would have passed on by the morning, but this was sadly not so. The rain had settled in, and the message ‘We told you so’ could be heard in concert from the bad weather collective. I looked at the map and decided that the faster south I got, the faster I would get to the end of the storm and into a different weather system. Still in good spirits with what I thought was a good plan, I packed up my tent and got on the road.

It was then, however, when blistering thunder echoed from the south and filled the perfectly horizontal sliver of space between the flat land and concrete cloud cover. Loud and clear, erupting from its belly, the storm made it known to all those in earshot that sh*t was about to go down. And indeed, it did. The monsoon began and I was caught with no shelter, on a motorcycle whose headlight was like a candle, wearing old waterproofs bought from a charity shop when I was 17. I had never, ever, been in rain like this in my life. I wobbled onwards at a maximum speed of 30mph with the rain hitting my bare lips like needles. I was so cross, and my endeared relationship with the weather turned bitter. My creative reel of profanities directed at the weather were bundled up and blown away by the howling wind and rain. Voiceless and powerless, it became a fight that I was inevitably going to lose. The idea of getting south unscathed was extinguished by the deluge. Sogginess became of all I owned and all I was.

The nearest town was called Hesdin, around 40 minutes away. I made it eventually and sat soggy and exhausted in a café with my motorcycle under a cover whilst the rain continued. On assessing the damage, everything was wet, including my phone which was starting to malfunction. I couldn’t camp out again and there were no affordable places to sleep in Hesdin. I had the whole day ahead of me still, so I decided to make a beeline for Paris, stay in a hostel and sort myself out. It was a four-hour ride from me, and there seemed to be sporadic lulls in the storm in which I could travel quickly.

I finally arrived in Paris at 6pm wet like a squirrel who had fallen down a waterfall. I took advantage of the amenities to wash and drying my things. It had been a disastrous start to the trip and already there was much to reflect and learn from.

The trip could only improve from this point on, and surely it did as you will read in future posts on this blog. But before I could see the positives again, I had my muddy ego to contend with, which was wounded by all the mistakes that I had made.

The next evening I sat outside a fruit shop on a street in Paris and filled several pages of my notebook with harsh words scrawled in red pen. In doing so I identified what it was that was really upsetting me – missed expectations and mistakes made with only myself to blame.

As I divorced myself from the expectations that I had dreamed up in the preceding weeks, my head lifted from the from my notebook and the egotistical wallowing came to a necessary end.

Self-centred thoughts blur the real world happening around us. After understanding and detaching myself from expectation, my bitterness settled. Only then did I become aware of my surroundings. I was in Paris on a midsummers summer’s evening. The Sky was blue and breathed spools of white clouds that floated like feathers between the rooftops. The last of the days sun rested on the chimneys and well-groomed men walked hand in hand with heavily scented women. The feeling of relief that follows a long storm could be felt in the air, and with it came opportunity and jubilance.

The nice owner of the fruit shop had just given me a box of figs and a bottle of juice from his leftover stock. Smiling, with a bite of sweet tasting fruit in my mouth and my eyes open to the world, things started to make sense once again. Lessons were learnt on these opening days, but I was safe dry and my motorcycle was in fine shape. I still had the potential for a great adventure ahead of me.