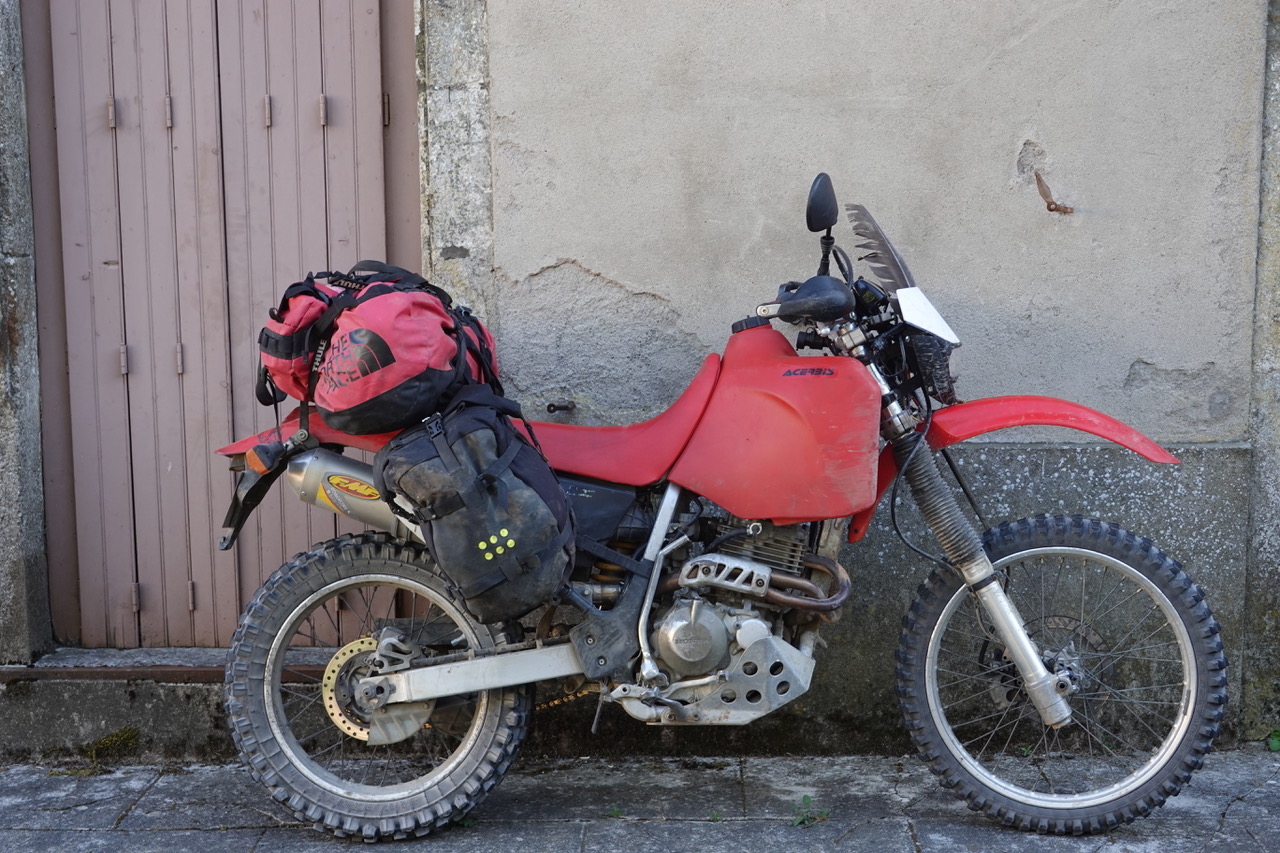 With the negative thoughts of the first days spun, softened and dried along with my clothes, I had an open mind to meet the road ahead of me. The bike felt good and I rode fast out of the Paris on a quiet Sunday morning. Josephine’s goodbye could be heard reverberating through the Parisian streets, scaring pigeons into flight and turning the heads of drowsy waiters opening café’s for the morning. My plan was to meet the off-road trails about 40km south of the city.

It was another exciting departure, however about 10km south of the City centre, Josephine spontaneously cut out and died. The human equivalent to this would be a perfectly healthy-looking woman suddenly dropping her face into a bowel porridge at the breakfast table. An instant death from a catastrophic brain haemorrhage, mid way through a predictably coherent and mundane sentence about her pilates class. Josephine had been running well and was cruising at 40mph a smooth road, but it seemed as though something fatal had happened. Thankfully I was able to coast onto the side of busy 3-lane road leaving the city. I jumped on the kick starter till exhaustion, but she didn’t respond – not even a hint of life. I could feel the dark thoughts of the opening days sitting menacingly on my neck.

I waited for a lull in the traffic, pushed her over the road and coasted down a slope into a small industrial estate scattered with burnt out cars and smashed glass bottles. I began searching for the problem, my mind fearing the worst – piston? Valves? A communist conspiracy?? A police car pulled up beside me to ask what I was doing at this industrial estate in the outskirts of Paris. After explaining, they said I wasn’t allowed to be here and had just one hour before I had to call my insurance. They would be back.

I returned my attention back to Josephine and called my friend Matt (see blog post “Prep with a little help from my friends”), who has been a sort of remote mechanic for me on the trip. Even he feared something bad had happened. What could it be? She was running so well before, she still turned over and there was still compression in the cylinder but she was so dead, almost as if it was binary.. dead/alive.. On/off.. AHA ! I thought about the ignition switch which had been tampered with by a group of pesky thieves two months earlier. My friend Matt who is a clever electrical engineer, had kindly re-wired the ignition barrel for me but it was possible that the damage had been too great to permanently fix it. I disconnected the ignition and taped up the terminals, which would effectively be the equivalent of removing it all together.

With the keys now obsolete and in my bag, I stood up on the pegs and gave her a desperately effortful kick. The moment leg reached the end of the stroke she roared into life and sat purring peacefully.  “Well done, ride like the wind” was Matt’s final piece of advice.

The Trans-European-Trail (TET) is an off-road network comprising of mountain passes and dirt roads that runs through almost every European country. It is a community-organised project to share the GPS co-ordinates of the trail, free-to-use for anyone. There is a TET “Linesman” representing each country with the responsibility of maintaining and updating the route. The online community is a constant hum from 30,000 biker nerds and proud pseudo-adventurers, sharing their experiences on the route or starting forums for discussion about equipment and the like. Even though I never contribute anything, I must admit there is something shamefully inviting about the community which is comprised mainly of middle-aged men with a bit too much money.

The 2,500km portion of the route I planned to do would be a challenge on my 20-year-old dirt bike, especially solo. But certainly she would be more at home on the trail, as she was never designed for motorway use.

My Iphone, which I had stupidly used for navigation, had been destroyed in the rain. I bought a second-hand waterproof Android from France’s version of Gumtree for £70. Using a free app called ViewFinder I downloaded the GPX file for the route and placed it on my handlebars with a silicone strap that I used on bicycle back in Scotland. Yes, right now I cannot rely on the luxury of fat digits in the bank to buy what is on the endless list of expense equipment available for trips like this. I had to make do and work on a very small budget – if you’re interested about the equipment, I will shortly post a piece detailing what I brought with me.

I met the trail by turning right off a dead-straight main road onto a thin dirt path lined on either side by the towering skeletons of perished sunflowers. The opening was barely visible and it would be completely unknown to all except for locals and those with the co-ordinates that it was part of a vast network of dirt tracks. The monotonous tarmac road was replaced with loose red earth which my off-road tyres sunk its teeth into with the satisfaction of hungry lion devouring its prey. I stood up on the foot pegs, squeezed Josephine tight between my legs and flew over the vast countryside into middle France. The route took me across wide open fields, through dark green forests and quiet french villages, far away from the noise of main roads. “This is the dream” I thought to myself. I had ridden countless hours on dirt bikes in the past, but there was a totally new feeling associated with the overarching purpose of reaching a distant destination off road.

I made 250 off road miles that first day, halted at times by dramatic bursts of rain which I had learnt to avoid and take shelter from. I could feel however that the weather was changing. Yes, the land had been quenched of its thirst, balance had been restored and the flowers were ready to welcome the sun once again.

I was in the middle of nowhere at 7pm when decided to stop for the day. I found a place to camp by a lake with a couple of rickety wooden houses nearby. I pulled up to one to ask if the lake water was good to cook with and a round-bellied farmer with a kind face, speckled with oil and dust, seemed to tell me that it wasn’t for some reason. Unprompted, He disappeared for a while returned with two bottles of spring water to give to me with a pleased but somewhat bewildered smile.

With the warm feeling of experiencing a random act of human kindness, I found a good camp spot and left Josephine to rest against a tall tree overlooking the lake. I patted her muddy fuel tank affectionately, saying well done old girl, rest well and please, please start tomorrow morning. I used my Trangia stove to cook up some veggies and sardines and gobbled them down hungrily.

The moon rose red above the tall reeds and the clear night sky slowly opened its thousand shining eyes. I am sure it would much sooner have closed them again as I undressed and plunged into the water, washing off sweat and dirt and soothing my body after the 8 hours of bone-shaking vibrations.

Only when I laid my head down to sleep did I realise just how tired I was. An intoxicating glow of happiness wafted from my body and warmed my sleeping bag, rising up to my nostrils, into my lungs, and soon, after only a few deep breaths, it cast me into a deep and dreamless sleep.

Same again tomorrow, nothing could stop me now.. Or so I thought..